Today, almost all business is business. Cultural awareness – reading body language, knowing what to expect on your multicultural virtual teams, and understanding the importance of a relationship-building conversation before a meeting – is for successful businesspeople today. This post is first in an ongoing series to help readers leverage insights into the eight dimensions of culturally based work style differences, so you can raise your own global business productivity

can’t imagine how many funny stories businesspeople tell about the cross-cultural awareness mishaps they’ve had.  And you won’t want to believe how many hair-raising stories they tell that go far beyond minor misunderstandings in cross-cultural communications – all the way to serious impact on global business goals.

I can still picture the man – a senior quality control manager at an aerospace firm – who broke out in a cold sweat as he realized that a subordinate working in another country hadn’t told him the truth about a quality check because he didn’t want to lose face in front of his boss!

Then there’s the oft-told story about the salesman who kept lowering the price of his product during a negotiation simply because his prospective client was quiet. He didn’t realize that his prospective buyer was simply considering the offer – in silence.

To overcome such mishaps in cross-cultural awareness, we created a simple model that helps you learn about cultural behavior in a way that’s easy to remember and enjoyable to practice.

Our ICAM© cultural model, which is based on the work of pioneers such as Geert Hofstede, Fons Trompenaars and Edward Hall[i], helps raise your intercultural competence by giving you a framework for understanding diverse perspectives and multicultural work styles. Its structure defines common behaviors that diverge based on cultural differences. It helps you interpret visible clues so you can better understand the and underlying thoughts everyone has – but which may be very different from those you’re expecting, as a child of your own culture. 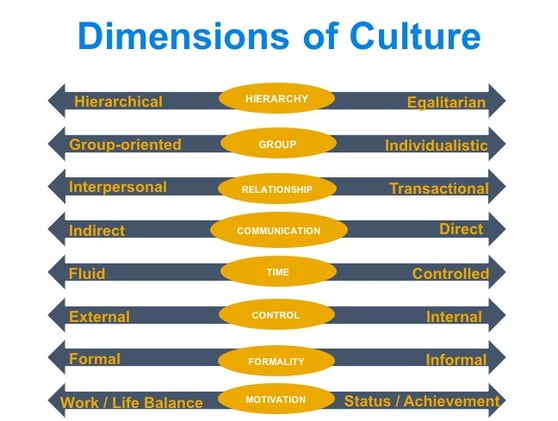 When you learn to become aware of behavioral differences across cultures and are able to plug them into a framework, you have a better idea how to respond and interpret others’ attitudes and actions, so that your effectiveness is not compromised when working in foreign cultures.

What is Culture and what is Intercultural Diversity?

Achieving full cross-cultural awareness requires a foundational understanding of what culture is, where it comes from, and how you can recognize cultural differences before you make mistakes.

Culture is the visible – and invisible – values and beliefs that underlie behaviors, created by myriad factors. It is a powerful force that shapes thoughts and perceptions; it’s learned and absorbed during the earliest stages of childhood; reinforced by literature, history, and religion; and embodied by heroes. All these influences are unique for each society.

At the core is a nation’s geography, its climate, its mythology, because these elements fashion its history and religious choices. Rising up out of these fundamentals is a complex web of values and beliefs, multilayered and intersecting, possibly woven with issues of race and class, shaped personality. These become the shared values and beliefs of a group of people, forming the underlying assumptions on which the whole society is built.

Ultimately, these influences produce what you see on the surface today: the way people actually behave. Culture affects the way you perceive and judge events, how you respond and interpret them, and how you communicate one another, in both spoken and unspoken language.

Since no two cultures share exactly the same influences, culture, with all of its implications, differs in each society. Voila! You have diversity. (Further, intercultural diversity is multiplied by the fact that everyone is individual and will express culture’s values in their own way.) These differences might be profound or subtle; they might be obvious or invisible. Ever-present yet constantly changing, culture permeates the world and molds the way you construct reality.

But how does all this help you become more cross-culturally aware? Don’t worry. You won’t need to lean a long list of do’s and don’ts that seem random and unrelated. You don’t need to look up every potential situation in the index of a cultural rulebook for every nationality.

Why not? Because culture isn’t random. It consists of distinct and logical behavior patterns that you can identify and measure. In our model, these patterns form the framework for analyzing culture. Once you understand that framework, you can use it to make a prediction about how people will respond in a variety of situations.

For example, if you know that Interpersonal Relationships are a core value in India and maintaining harmony is central to that, you can make educated guesses about how to conduct business, maintain deadlines or bring up difficult subjects with people on your team who are from India. If you have a colleague who is Swiss, and you know that it is a society where Communication is very direct and extremely brief, you’ll be less likely to take offense when he is blunt with you.

Interculturalists and anthropologists have studied contemporary societies in work-life situations and have identified basic characteristics in these cultures, which we call Dimensions. They’ve enabled us to make relatively reliable, research-based conclusions about the behaviors we observe and what they mean as we interact with people from diverse cultures and backgrounds.

The RW3 ICAM© Model consists of eight Dimensions: Hierarchy, Group Orientation, Relationships, Communication, Time, Change Tolerance, Formality Motivation. We measure these on a spectrum. (See the illustration.) For example, the Communication Dimension ranges from Direct at one end to Indirect at the other.

The RW3 ICAM© Model is a tool for businesspeople who need to understand their own behaviors as well as those of the people they’re working with. We’ve created a Culture Calculator that builds on familiar terms and experiences, and helps you observe and adjust to the intercultural differences you encounter as you work across cultures in our culturally diverse world.

Over the posts in this series, we’ll describe all eight Dimensions in detail, with practical ideas to help you observe and understand your colleagues from different backgrounds. First up: Relationships. 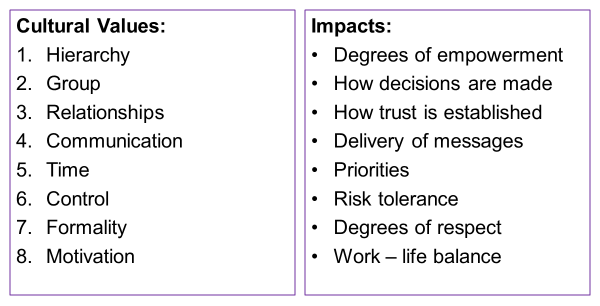