It’s no question that many cultural differences have roots that go centuries deep into a country’s history, yet aspects of culture are always changing over time. Take chopsticks, for instance. Though invented in China many years ago, these utensils have since adapted to the several cultures in which they’re used, and furthermore have developed particular rules of etiquette!

A Brief History of Chopsticks

The first chopsticks were said to have been developed about 5,000 years ago in China. They were originally used to stir, move, or grab food from a pot or out of a fire while cooking. I’m sure that even thousands of years ago, no one liked to burn their fingers from grabbing delicious—yet hot—food! Over time, Chinese folks began to use chopsticks for eating, not just cooking.

By 500 AD, these simple utensils spread to Japan, Korea, and beyond. As chopstick use spread internationally, these cultures adapted the tools to meet their own cultural preferences. In Japan, for example, chopsticks were originally reserved for use during ceremonies, but eventually made their way into the home as eating utensils.

To this day, chopsticks still differ across cultures. They vary in length, shape, and material. Let’s look at some of the regional differences.

The Cultural Differences of Chopsticks

Chopsticks in China are typically made of bamboo, but they might also be made of plastic. Chinese chopsticks usually have a blunt tip, and they tend to be longer and thicker than chopsticks in other cultures.

Unlike China and Japan, chopsticks in Korea are usually made from stainless steel. Why steel? Legend has it that metal chopsticks date back to when Korean royal families used silver chopsticks, since silver would change color if exposed to any poison. That way royalty could determine if their food had been tampered with!

The Do’s and Don’ts of Chopsticks

For a westerner who’s used to using a fork and knife, eating with chopsticks can come with a bit of a learning curve. But the learning curve is more than about technique—there are some potential faux pas to be aware of, too! This is especially important in international business. Since many eastern countries tend to communicate indirectly, bad table manners could cause you to lose face at an important business banquet. Here are a few chopstick do’s and don’ts:

If you’re not used to this cultural difference, using chopsticks might take a bit of practice. But don’t worry, it’s possible! More than a billion people use them every day—in fact, each year 24 billion pairs of disposable ones are used in Japan alone!

Be culturally savvy!  Here are some tips on how to use chopsticks. 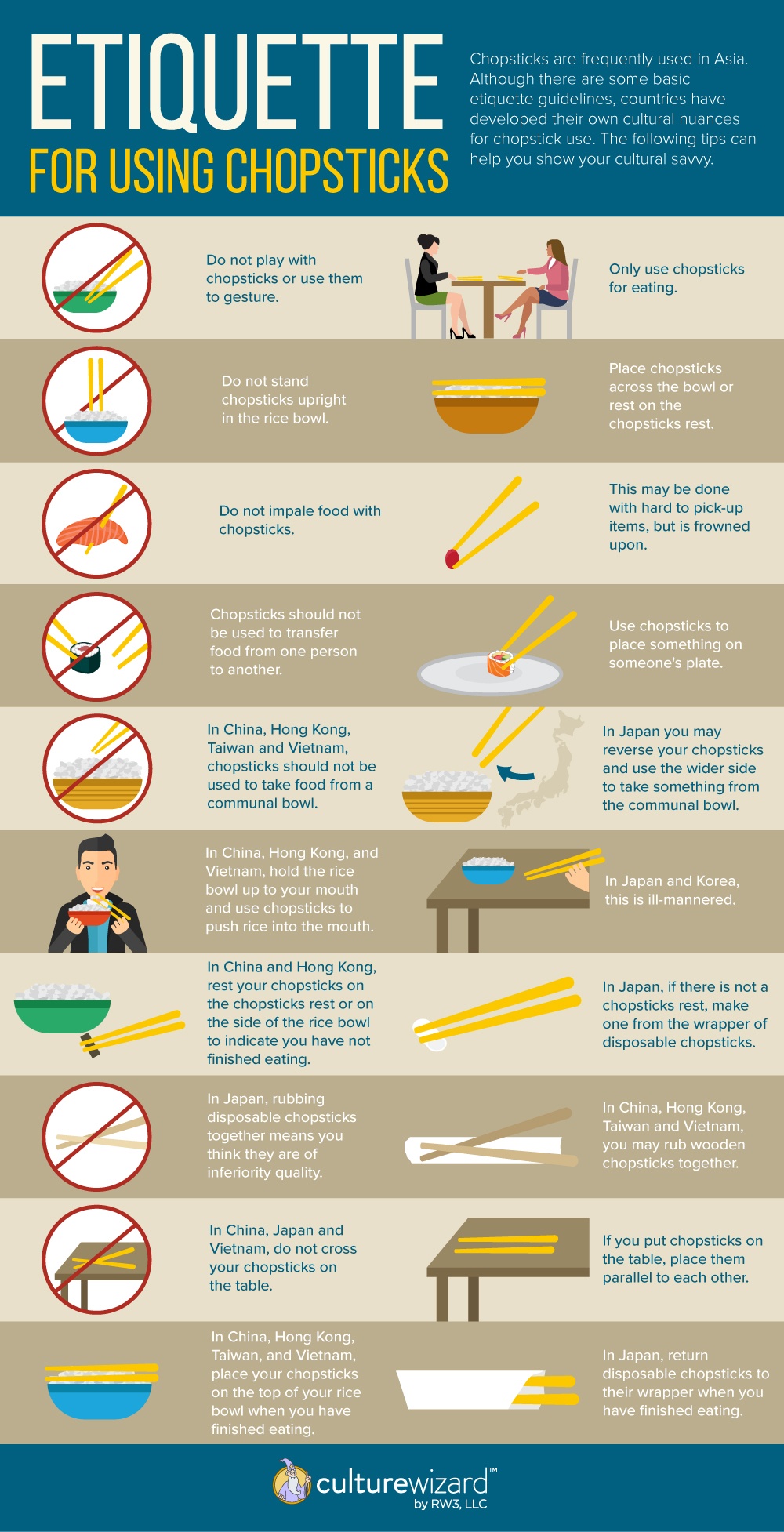 I was once chastised during a business lunch in West Africa because I ordered a gin and tonic with my meal. After I committed that cultural faux pas, I was told that hard liquor is for “only dinners and night clubs.”

Breakfast Across Cultures
by Devin-Jean McCormack posted on November 22, 2019